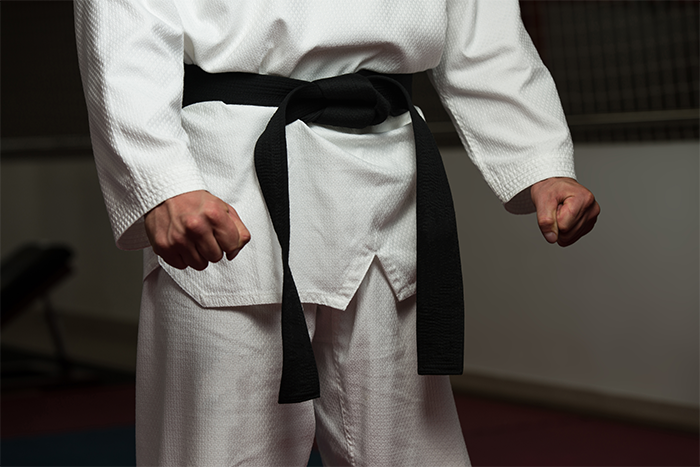 As well as being a great success story in its own right, the rise of Lee Matthews should provide motivation and inspiration to all martial arts instructors, whether they are just starting out or are looking to grow their existing business.

I started my martial arts school in 2000 with a group of about 12 men teaching them for one day a week. The training was hard just how I liked it but it was only a hobby then and if I had kept on doing what I was doing then it would have stayed that way.

I then joined NEST and moved all of the students on to 2 days a week. I spilt my classes up by age to start with and changed the way I took the classes so that it wasn’t just for tournament fighters.

After about 7 months I had about 100 students and had to split the classes down by ability as well as age. After 1 year I had 150 students and moved into a full time location. We opened it with 200 students but within another 3 months we were up to 300. I then started competing again which I had to stop because of all of the other stuff that was going on. I also started training students for tournaments and had 300 people to choose from. I picked 15 of them and gave them all of the hard core training that I was doing. Within 2-3 years I had one of the top kids teams in the country.

As I started producing black belts on a regular basis it soon became quite apparent that many of them also wanted to teach. So I slowly started to systemise things and train them up. We now run an instructor training course called the L2 course 3 times a year, where we teach this to potential instructors and the ones who get the best grades are allowed to open up schools with us.

We are now the biggest chain of martial arts schools for karate, kickboxing, ju-jitsu and mixed martial arts in Telford and Shrewsbury as well as throughout Shropshire, the midlands and the north west of the UK, with over 30 schools and nearly 1,000 students.

We have a reputation as one of the most professional martial arts schools and organisations, with excellent standards for both our instructors and students.

Our instructors are some of the most professional, inspirational and well trained in the country and are highly motivated to get the most out of their students in every class.  They are also close protection experts and have passed all the required CRB checks.

Young children and adults are welcomed at all levels to learn how martial arts can be combined with fun, fitness and structure to help anyone get the most out of their life.

The team has put together programmes designed specifically for certain age, gender or ability groups. From little Ninjas 4-7 years, Children’s Karate 8-11 years through to Adults and Ladies only Kickboxing. For further details, visit www.leematthews.co.uk

Lee Matthews is a 4th Dan in Sport Karate, 4th Dan in Kickboxing and a 1st Dan in Karate. He trained in Boxing under World Champion Richie Woodhall and in Brazilian Ju Jitsu by World Champion Braulio Estima. Lee served for 7 years in the 3rd Battalion of the Parachute regiment of the British Army and was an integral part of operations in both Northern Ireland and Kosovo. Lee trained as a PTI and spent a short amount of time at ATR Lichfield as a PTI for PARA recruits.

He is the current heavyweight for Great Britain in the WAKO nation Kickboxing team and competes all around the world. He has won the WAKO British championships 5 times and is WAKO Pro European Champion as well as World bronze medalist.

Lee teaches nearly 1,000 students in the West Midlands and Cheshire area. He has trained 5 world champions and some of the highest standard children in the world.

In 2008 he started a new venture with fellow ex-Serviceman, Lee Sansum, called British Military Martial Arts, the only organisation in the UK to have all ex-military instructors teaching martial arts at their schools.

They also offer service leavers with a passion for Boxing, Self Defence or Martial Arts the opportunity to attend a week long Career Transitional Partnership (CTP), which is a registered training course designed specifically by ex-Servicemen.

Successful course candidates may then get to work within a close knit group of ex military staff teaching Martial Arts to the wider community.

NEST was a newly formed company when I joined them 10 years ago and they had been referred to me by Jon Jepson. When I first met with Gerard I quickly realised that their values were the same as mine and decided to join them immediately. They helped me implement small changes straight away as well as some big changes to my school that sent me off on a different path and really made a difference.  If I hadn’t made these crucial changes then I definitely wouldn’t have multiple locations now!

NEST has taken away the major headache of collecting fees each month, whilst giving me the advice and guidance on how to achieve my goals. My hobby is now my job and I couldn’t be happier.

I particularly like the way NEST make you feel like you are their only customer. It’s like having all of their staff as an extension of your own team. I really utilise all of the resources that they have and I am on the phone to them most days. I really like the fact that when I call the office the whole team knows who I am before I even tell them that it is me.

NEST has been a huge help to me with developing my franchise model, which is now the biggest in Shropshire and also with my advertising campaign for ITV. But it is with the day to day running of your business where they really can help people.  When you have to make a decision and you are not too sure what to do, you can always run it by a qualified specialist first.

NEST is also really good for networking opportunities and meeting like minded people and on behalf of all my staff and students I would like to offer congratulations to NEST on their 10 years in the martial arts industry.