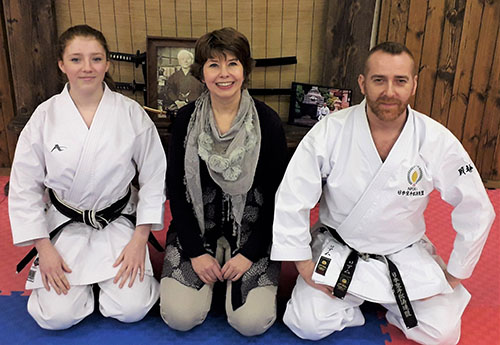 I know the North, I live there. But my Yorkshire stomping ground dips to low road status compared to the high road I headed for last week in a road show visit to the second shortlisted nominee for the NEST Academy of the Year 2019 award, Senjokai Karate Academy.
Newly appointed 5th Dan, Sensei Liam Gallagher heads up a ‘wee belter’ nestled in the centre of Stewarton, East Ayrshire. The Senjokai HQ is a modern industrial unit with a traditional dojo interior that still manages to surprise despite this being my second visit after the academy was shortlisted for the NEST award last year. The Tori Gate, wooden panelling, shoji screens and trophy cabinet (though this is fuller now), I remember well, but as I’m blow in sideways on the winds of Storm Gareth, I notice there have been changes.

The Karate Kids’ class taken by Liam’s teenage daughter Louise is part way through and apparently having done well, the mini students are ushered past me, upstairs into the eaves, yelling with delight. I follow, puzzled. Last year this space was used for storage. Not now. Today there are rows of chairs, a white board and projector screen. It’s a classroom-cum-movie theatre, and the kids are watching Kung Fu Panda’s best bits.

The improvements don’t end there. Downstairs, Liam’s old office is now a small, well stocked martial arts shop doubling up as a refreshment centre, and the viewing area is made more convivial for spectators with the addition of café tables.
I like that things have moved with the times. Reassuringly, though, other aspects remain firmly rooted in what’s gone before. Like the academy’s strong focus on family that sees father and daughter teach toe to toe, parents and kids train together in classes for all ages, and uncompromised Karate technique taught open-handedly and with good humour.
At the Senjokai, investment in the future shares mat-time with a celebration of traditional values, and I find it a privilege to watch.

Warm thanks to Sensei Liam, Louise, Wai-Ling and the Senjokai family for their generous hospitality during my visit.

Before leaving to trek back to Pennine hills, I took an opportunity to jump on the dojo mats and strap on my black belt in interrogation. Here’s how Sensei Liam and Louise responded…

Sensei Liam Gallagher: I wanted to blend the traditional and modern in the dojo. With one wall showing a more traditional image of a Tori Gate and aged wooden panelling, the other main wall showing a more modern ‘studio’ with mirrors and a television. The paper effect (shoji) panelling on the third wall binds it all together while hiding the outer shutters and keeping the aesthetic.

The Wall of Fame display in the Senjokai shop… who are the Sensei pictured?

Sensei Liam Gallagher: We are very proud to have hosted these Sensei at the Senjokai. Each one brought their own take on Karate from the traditional to modern.

*Hajime Makita Sensei (5th Dan) – Instructor at the JKS Honbu in Tokyo and the organiser of Karate in the Tokyo 2020 Olympics at the Tokyo Budokan.

*Ali Nyoni Sensei (5th dan) – A multi World and British Karate Champion, one of the top Karate athletes and coaches in the UK at present.

All these Sensei have become great friends and supporters of Senjokai and love coming to teach our members.

I understand you’ll soon be making another trip out to Japan?  Tell me about these visits and how the academy benefits?

Sensei Liam Gallagher: We are incredibly proud of our strong links to Japan, the home of Shotokan Karate.  We run cultural trips to Japan for our members which include tours of Kyoto, Nikko, Kitta Kamakura and of course Tokyo itself. On top of that, we train extensively at our Headquarters in Tokyo under the best Karate masters in the world today. (We also have trips in November to the world famous Teikyo University to take part in the JKS International course.)

The training aspect of the trip is invaluable and never ceases to have a profound, inspirational effect on those who train there, and on the dojo when we return.  Besides the physical and technical, we always return with a deep love for Japan and its culture, and a deeper understanding of our martial art.

I hear that Senjokai Karate Academy hosts a fundraising committee… what impact does it have?

Sensei Liam Gallagher: The fundraising committee is a powerhouse. Run separately and independently from the ‘business’, it has a simple remit… benefit the students and wider community.

In the last two years, the committee has raised thousands of pounds for the benefit of all our members and the wider community, holding events such as the ‘Senjokai Litter Pick’ which rallied the town behind us. It also ensures that we ‘give back’ as a portion of the money raised is donated to charity.

What academy achievements make you most proud?

Sensei Liam Gallagher: Simply put, ‘family’.  We have some outstanding athletes who compete at a high level and of course their successes are inspiring for all members, but it’s the sense of community at the dojo that makes me most proud, the friendships made, regardless of income, race, religion or bias. Senjokai is a family.

Sum up the Senjokai philosophy in a sentence.

Sensei Liam Gallagher: Our dojo motto sums up the skills we try to build within our students: Honour, Integrity, Character.

Louise, I’ve just watched you take an energetic Karate Kids’ class – is teaching the next step for you?

Louise Gallagher: I love teaching! It’s fun and keeps me on my toes. I have a great bond with the class and I must be doing something right as they bow off the tatami with big smiles. It’s great to be given the opportunity to share knowledge that I’ve worked so hard on.

I’d definitely consider teaching as a career choice. After watching my dad achieve his dream of teaching Karate, I know it’s possible. It’s not only possible, it’s fulfilling. You watch people grow up through Karate, getting better and better, achieving more, making friends, learning respect. Why would anyone pass up such an incredible opportunity?

Even if it doesn’t become a full-time job at first, I will always help my dad and continue working with him as well as training.

What have you gained, growing up a Senjokai Karate Kid yourself?

Louise Gallagher: My Karate journey has still just started. I’ve got loads to do.

I started Karate when I was four, it was something special my dad and I could do together. I thoroughly enjoy it. I’ve gained a hobby I love. It keeps me fit and gives me something many teenagers don’t have – goals.

Goals are so important for me, they keep me going and push me to constantly achieve. (Even failing can be achieving.) Karate has been a major contributor to me gaining confidence through teaching, competing and communicating.

I also have a good mentality. We all have bad days, but you learn from the bad days and it’s how you deal with them that’s important. When it comes to attitude and self-discipline, Karate is the best thing. I’ve also gained friendships I couldn’t have found anywhere else. We’re a team, and that’s the best way to describe our club.

Louise Gallagher: I will be competing in Kata (pattern/form) and Kumite (fighting). I am super excited!  It won’t matter if I lose or get put out first round, it’s an achievement and a great experience for me to continue my Karate journey.

About the author: Moira Spencer previously enjoyed a long, successful career in publishing sports titles, including Martial Arts Illustrated and MMA Uncaged magazines. Now qualified in Professional Interior Design, she has combined this creativity with her knowledge and understanding of the sports industry to launch Glove & Lotus, an interior design consultancy specifically for sports academies, clubs, studios and home gyms. For more details on this unique service, visit www.gloveandlotus.com phone 0787 8750045 or email moira@gloveandlotus.com