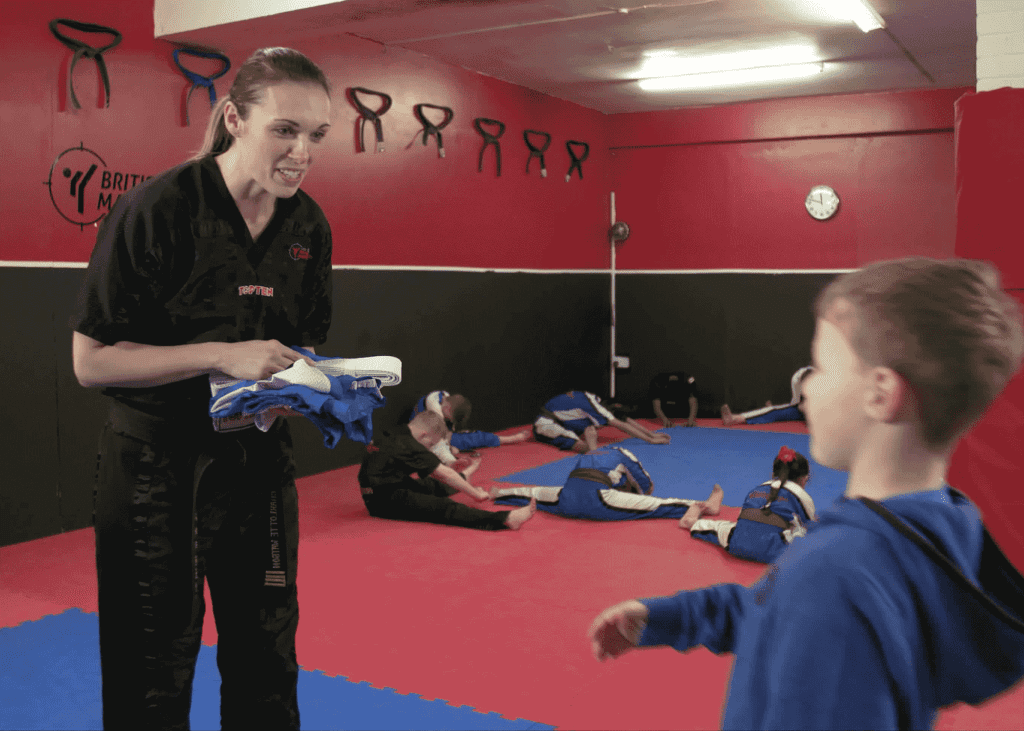 I first started training in Martial Arts in 1983, aged 10, at the local Aikido group.  After my first lesson I was hooked!  I became obsessed by the martial arts and loved everything about it.  I subscribed to every magazine, bought “International Karate” for my commodore 64 and sought out every book I could get my hands on .

I joined the local Karate class soon after, which was part of Kanazawas Shotokan Karate International group and trained 7 days a week in one system or another.  As part of the Kanazawas system we trained Tai Chi every Sunday morning. Unfortunately the Aikido class folded after around 5 years of training, but this gave me the time to train in other styles and systems wherever I could and of course focus on Karate.

At 16 I achieved my 1st Dan.  I had competed and won a number of regional and national  championships in Kata and was selected by Sensei Asano to represent England as a Kata competitor at the European Championships.  I was training intensely when all of my friends were down the pub on a Friday night. I’d also get up early on a Sunday morning to go to classes.

I also taught my first children’s class at age 16 when my instructor couldn’t make it and was soon teaching all of his childrens classes . I thought that this would be great  to do as a living, but in the late 1980s there was no such thing as a serious full time martial arts instructor, at least as far as I knew.

At 18, I opened my first classes in west London as an add on to those offered by our club already, and I soon found that these were very popular with both new and existing students.  Unfortunately I moved to East London to go to University, but I kept the West London classes going as I didn’t want to let the students down.

I went on to take my 2nd Dan under Kanazawa and then my 3rd and 4th Dan under Steve Rowe of Shikon.  I have been taking regular private lessons with Steve for many years now and under him have learnt the Yang Cheng Fu Tai Chi and Kung Fu system which I teach alongside Karate.  My Karate has also been heavily influenced by the Shikon system, although it is still Shotokan in essence.

As the years passed the student numbers gradually grew and the other instructors in our group offered me their club nights to teach as they had other priorities.  I was working a full time day job and teaching and training a full time martial arts schedule.  I would leave the house at 7am to go to work, get in at 11pm and then do the same the next day.  Weekends were filled with courses or competitions.

I made a decision – to do this full time and make a living out of it. Then married with a young child to look after, a good job in the City and a mortgage to match, I couldn’t just quit the day job. One thing that Martial Arts has taught me though, is that perseverance, dedication and hard work pays off. Most things that really matter in life are hard earned.

For a couple of years, with guidance from NEST, I built my school until I had sufficient numbers to make the jump.  Then, aged  30,  I did it and have never looked back!   People sometimes look at me now, doing what I love as a job, earning enough to support a family (now with 3 boys!) and they say “You’re so lucky!” As I remember all of those hours training and time invested in building a business, I usually just smile.

My school now runs in 5 locations teaching over 500 students (aged from 4 to 64 years) each week.

Within my school we have Little Ninjas classes for 4 – 6 year olds, Karate Kids for 7 + ,  Adult Karate and Self Defence,  Tai Chi for Health, Tai Chi Kung Fu, Kung Fu Weapons, Grappling classes, leadership classes for children and Instructor training courses.  I also teach corporate classes and do a regular fortnightly session at the Dominion Theatre in London.

Underpinning the foundation of my school is integrity.  Not just as a word to mention in the leadership course, but as a genuine principle to the school.  We work to the idea of “Kaizen,” or continual improvement, for every aspect of the school from students to instructors to business practice.

With this in mind we have grown because we have good retention.  We maintain standards and don’t just give away grades and our students know this.  They have to earn their grades, learn about perseverance and develop themselves.  As Jim Rohn said “Do not wish it was easier, wish you were better.”

All instructors, including myself, must be continually learning and challenging themselves.

The school is a friendly place that builds people up to challenge themselves, especially children, and doesn’t just throw them in the deep end from day one.  Martial Arts really should be, in my opinion, about building the characters of those taking part.  For me personally it is through the training in the arts that I am both who I am and where I am today and after nearly 30 years, I’ve only just started.

When I first decided to make my martial arts school a successful one, I soon realized  it’s not just about being good at a martial art and able to teach classes.  I knew plenty of very good martial arts coaches but their schools were not run in a very successful way.  There was something missing and I looked  at the successful ones I did know for the answer.

There is far more to running a successful Martial Arts business than most people appreciate and to have the guidance, industry knowledge and experience is invaluable, especially when starting out.  That’s why I chose NEST initially.  I looked at numerous other billing companies, but intuitively I felt that NEST could be trusted and based their own business on values of integrity.  They had a good understanding of the various business models that could be used and were able to advise and offer guidance on every aspect of the business.  They were clearly not just “another billing company.”

Gerard was always available for my questions and willing to give his time generously.  With their company structure it is in NESTs interest to help me succeed and Gerard and the team were very keen to do so. They had created  a Win/Win relationship.

After 10 years NEST continue to present a very professional image for my school and offer guidance on any issues that have arisen in our school. The billing side of a business is always a headache for me  – NEST handle this very well and I certainly wouldn’t want to be doing it!

The monthly direct debit is taken care of and the student bases their commitment to the school upon their perception of what we actually do.

As my school grew, my accountant at the time recommended I set up as a Limited Company.  This had VAT issues and NEST were very quick to inform me of the consequences of doing this and arranged for me to meet with Carl from Dennis and Turnbull, who I now use as my own accountants. NEST have a great network of contacts and know the right people to contact for this industry.

NEST have also helped with the set-up of my new schools, helping me with demographic data to best choose where to open my Norfolk schools.

I have also worked closely with NEST on building the school system, and am looking forward to implementing this across my schools in the near future.  I know that NEST will do their utmost to make this work for me and all their customers.