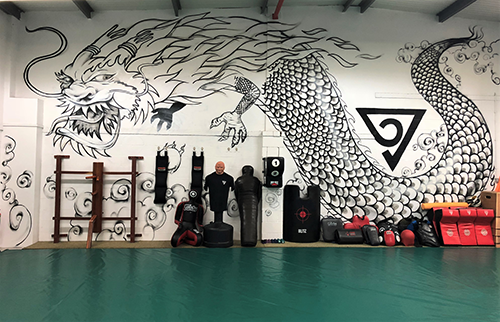 I moved to Milton Keynes in 2000 and immediately looked for clubs to train at. I ended up being asked to teach after only the first week at my new club. I was really into JKD, Filipino martial arts and Thai boxing back then. I really wanted to teach those arts so I put an advert up in a local library. I got 1 call from that poster – Stuart Harris who used to come and train with me once a week in my garage.  Stuart is now my business partner.

It really took off and we outgrew it within a year, moving to another part of the leisure centre. After years of steady growth our numbers plateaued.  We then faced eviction as the leisure centre was being demolished, so we desperately hunted for a new location. Luckily we found one within a shopping centre only ½ mile up the road.  So we moved into our 4000 sq ft premises, which has been our home now for nearly 8 years.

It has been an uphill struggle and moving to such large premises made me realise that being a good martial artist doesn’t pay the bills. Learning how to be a business man and how a business works is what keeps all the top schools running and profitable.

I chose the name Total Dojo because I wanted a place where people could come and learn lots of different martial arts.  A school which welcomed all, irrespective of age, where there was very little ego and an emphasis on the growth of the individual.

In our first year I realized that it wasn’t actually about martial arts but making a difference to people’s lives. People were saying how confident they felt, how much weight they had lost and how these things had changed their lives. I realized that we had a huge responsibility when on the mat teaching.

These days we try and make sure that all our coaches are well qualified and constantly learning. We now offer clients nutritional advice, sport injury advice, corrective exercise as well as helping people using NLP and hypnosis to overcome fears and self esteem issues.

All these added extras help us to build a good relationship with our students and give them extra value, it is not just about getting people to punch and kick it’s about changing lives.

All of my coaching staff have been with me for more than a decade. They all started in the club and are still learning and helping others achieve their goals. I am very grateful to each of them and count myself lucky to have such a great team around me.

Tony Davis – His journey so far…

I started martial arts, probably like most people my age, because of Bruce Lee and watching Enter the Dragon. Although born in this country I was fortunate to grow up in the Canary Islands, so most of my spare time was spent on a beach or in the sea. I was always out surfing/windsurfing but if there were no waves or wind I used to get bored so a few friends and I took up martial arts lessons.

My first instructor was a full-contact Kickboxing instructor but he mixed in lots of different martial arts including Karate and Tae Kwon Do. I couldn’t get enough and discovered that there was a group of ex-pats from all different backgrounds who used to get together to train. So as a young kid I was exposed to cross training from the outset and that has remained with me throughout my martial arts journey.

I was lucky to discover Anton St James when I was at university and many of my foundations came from him. He had two students, who became very close friends and in my opinion are two of the best instructors out there today – James Evans-Nicolle and Matt Chapman. Another of Grandmaster St James’s students, Tom Barlow is a double world no gi champion, so it was good company to be keeping back in those early days.

I still cross train and mix things up as much as possible. I get hit with sticks and train knife and empty hands with Guru Bob Breen in his JKD 4D system every week. I wrestle and grapple with Nathan Leverton and we are affiliated to Kev Capel and Roger Gracie for our BJJ.

We have trained with many different people and have lots of influences. It’s fun to meet new people and challenge yourself constantly. That’s why we all got into this industry, but it’s amazing how many instructors stop training and growing. When that happens it’s just a job!

Stuart was my first student and came from an internal martial arts background of bagua and tai chi. He has vast knowledge and together we have travelled the world teaching and training together.

We both trained and taught KFM for nearly 13 years before it disbanded and Stuart has gone on to qualify in Krav Maga and recently undertook instructorship with Phil Norman and his Ghost system which suits him perfectly due to his freakishly long arms!  I am lucky to have a great partner.

I also have a great gym manager, James Russell, who is a European K1 champion.

I ran a martial arts club at university and back then it was ‘pay as you go’. We had quite a big club but could never tell how many people would turn up. During the various breaks there would be no one training and then everyone would re-emerge once reading week or exams were over.

Arranging transport from the university to the local leisure centre was a challenge as we didn’t know if we needed a minibus, a 40-seater coach or both. We couldn’t predict cashflow (students are notoriously wishy-washy with commitments).

When I decided to open a full time academy I decided that we needed a management company to avoid the problems that I had encountered with the university club. My first billing company wasn’t great. I received no help from them and they didn’t do what they had promised.

Feeling pretty disappointed and confused as to the next steps, I decided to go and meet with Gerard at NEST. Instantly I felt in safe hands, his professional approach and his vision for NEST prompted me to sign on.

That was 12 years ago and it was one of the best decisions I have made. It baffles me how on internet forums I see people asking if they should charge monthly and will people leave if they stop doing pay as you go. The other argument I hear is that if you are charging by direct debit you’re doing it for the money and not the art!

NEST have been at the forefront of turning the martial arts industry into a more professional one. In my opinion they have been pivotal in raising standards and educating school owners in general business practice, customer services, retention, marketing and sales.

NEST continue to improve their service and are constantly looking for new methods to help school owners grow and make their schools more profitable.