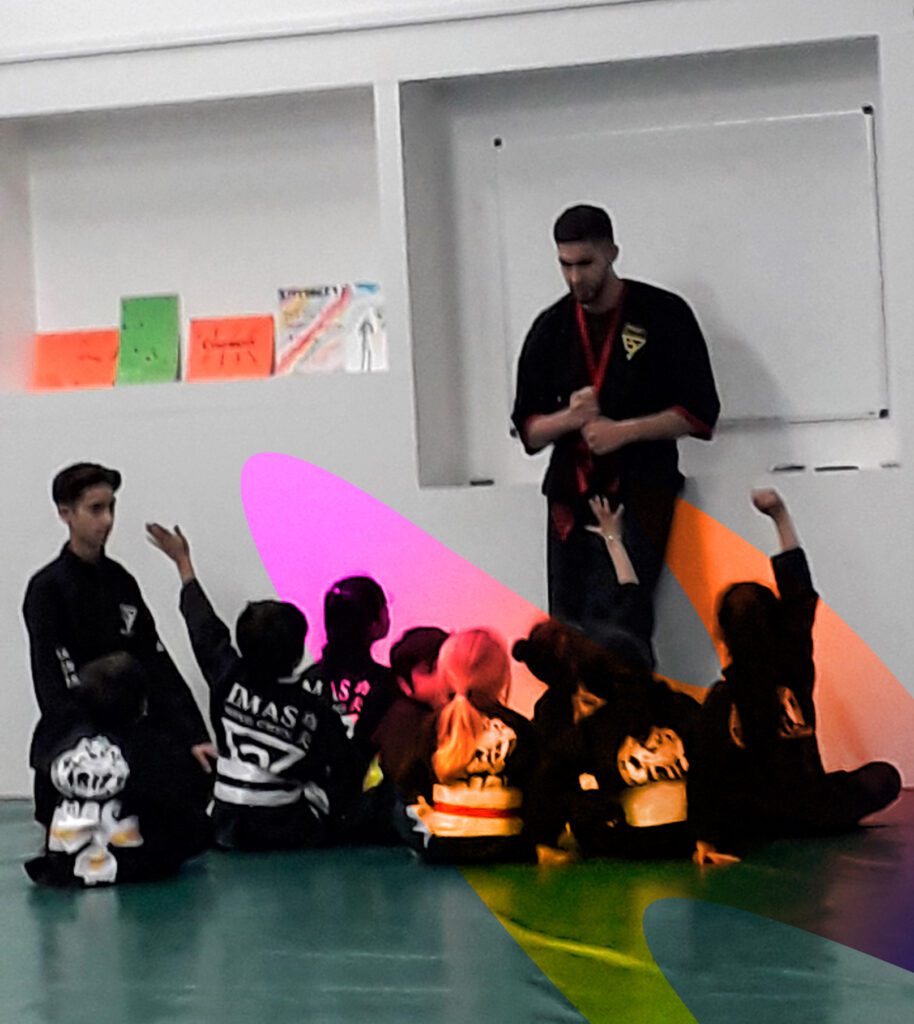 I could fight more or less from the time I could stand up.  I didn’t start any form of martial arts training until I was 14.  Until then I had never been beaten in a fight so I didn’t see the point.  When a boxer broke my nose, I decided that I had better start learning so it didn’t happen again hence I started boxing.  In Sutton (south edge of London) in the seventies there was no chance to train kung fu, but when I went to University in 1981, I joined the kung fu club and never looked back. I represented the UK in a competition in 1987 and first met Master Tan Soh Tin under who I went on to train, travelling to Singapore twice a year.  In 1993 I won my first world title in Los Angeles, the second came in Italy in 2005.  In 1994 Master Tan took me as his first disciple student and put me in charge of the UK branch of Nam Yang, which I have run ever since.  Over the years I have trained four world champions and an Olympic wushu competition bronze medallist, coached the British full contact team, demonstrated in front of a live audience of 10,000 and TV audience of 100 million, run national and international competitions met the Queen and travelled over large tracts of the world.  I think the more that you put into martial arts the more that you get out of it.  Most importantly, I have always remained loyal to Master Tan and Nam Yang and not set up independently as so many people do.

As a teacher, it is my job to produce the best quality students that I can and ideally produce more teachers so that our club can grow.  The hardest thing is that I just don’t get enough contact time with most of my students to get them where I know that they are capable of going.  For a long time, I had discussed the idea of a residential school where we could train full time.  Prices in the UK are very expensive so I had to look abroad.  I almost went for southern Spain but when I married a Thai it clinched it for Thailand! Thailand is a big and incredibly diverse country.  It is mostly hot, which can be a disadvantage, but when I travelled to the remote North Western mountains, near to Burma I found the perfect spot.  The high, jungle covered mountains are cooler than other areas and benefit from incredible fresh air.  The quality of the ‘chi’ here is famous with the Chinese – it flows down from the tops of the Himalayan mountains.  The food is fresh, the climate moderate and the locals friendly – the perfect training environment which we dream about but seldom experience.

The Camp has accommodation for 48,  two training grounds – one open, one roofed and matted – specialist training circuits and equipment, a restaurant, wifi, a small Buddha house and a giant statue of Tat Moh (Bodhidharma) the Shaolin founder.

Since we are not presently full, I have agreed to let the facilities to genuine martial arts groups for courses, training camps etc…  It certainly provides an unforgettable experience, with phenomenal photo opportunities, and weighs in very cheap compared with equivalent facilities in western countries (which generally don’t benefit from the views or the weather either).

For the benefit of fellow teachers, I am offering a package comprising accommodation, breakfast and evening meal and full use of the facilities for $189.00 US per week.  At the time of writing, this amounts to approx £115 and will get cheaper as the pound recovers!  Since high quality martial arts courses sell for so much more than this, the potential exists to make a considerable profit by running courses at the MTC.  The quality and uniqueness of the venue act as major selling points and individual instructors are free to organise and teach their own courses without interference.

One free place for every 10 students booked.  Offer valid until November 2010.

We can help individual groups plan courses so as to get maximum benefit from the MTC.  For more information contact info@namyang.co.uk.

A lot more about Nam Yang, Iain Armstrong and the MTC can be found at:

Before I took the decision to join NEST I checked out two other billing companies / consultancies in considerable detail but ultimately declined them.  I eventually chose NEST because:

Unlike most other companies, NEST does not operate a fixed term contract.  We have a friendly relationship with our students and a good reputation in our local area.  I feared that if we went with a company who took students to court if they did not continue paying for the agreed length of time, our reputation could suffer considerably.  The NEST contract effectively only ties students in for a month at a time: which is extremely reasonable.

NEST came across as a very friendly yet approachable group, particularly Gerard.  In fact NEST works like many martial arts groups with the head man effectively stamping his personality on the group and acting as the ambassador.  Gerard is a tiger in the Chinese horoscope which makes him an ideal leader but a libra in the western horoscope which moderates the tiger tendencies and makes him the ideal diplomat (essential when dealing with lots of martial arts teachers!)

Finally, NEST seems more geared to allowing its member groups to retain their own identity than its American based competitors.  We are a kung fu group with an unbroken lineage and a very strong identity and want to stay that way.  Whilst we want to be a successful business we do not want to over commercialise.

The principle benefits which we derive from NEST membership are:

In comparison with setting up standing orders with our students, which we had done previously, the direct debit system which NEST employs allows an annual price increase in line with inflation to be implemented without having to set up the standing order all over again.  If you take the time to work it out, this makes a lot of difference.  We compared the workload involved in looking after the standing orders with the fee that NEST charge and decided that NEST was good value for money.

NEST provide a good set of reports and statistics each month which enable us to monitor and fine tune our operation more effectively.

We get a good consultancy service through Gerard, who has his finger well on the pulse of the UK martial arts industry.

NEST have proven time and again to be prepared to provide us with service well beyond what I consider that we could reasonably expect from them and I appreciate this most of all.