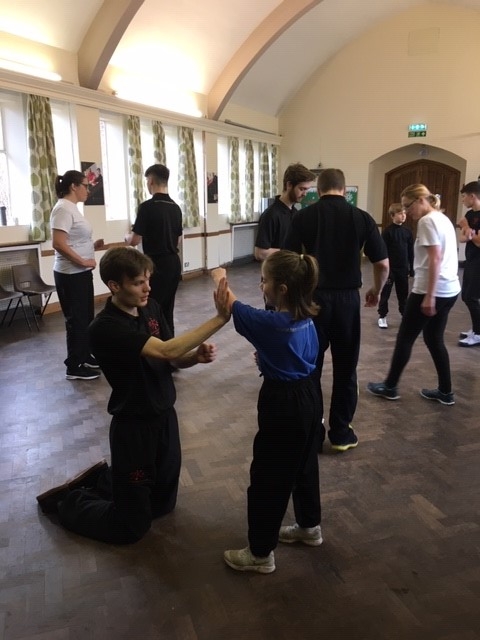 It was in the late 1950’s that Grandmaster In Hyuk Suh (Kuk Sa Nim) began the monumental task of organising and formulating the many scattered martial art techniques of Korea into a single system, which he named Kuk Sool in 1958.

In contrast to other popular martial arts in modern-day Korea, Kuk Sool Won uses radically different spinning techniques and low stances. So it took the public some time to adjust, but eventually its popularity grew to epic proportions.

Then in 1974, when Kuk Sool Won was highly esteemed by the public, In-Hyuk Suh took his martial art out of Korea to the United States, forming the World Kuk Sool Association® in 1975.

Originally headquartered at San Francisco, California, the demands of an expanding global presence dictated moving to a more central location, and in 1991 the World Kuk Sool Association® was relocated to Houston, Texas.

2008 was a landmark year for Kuk Sool Won which saw the art commemorate its 50th year.  It also marked the 20 year anniversary of Kuk Sa Nim, In Hyuk Suh’s first visit to the UK, when the first UK tournament was held.

Today, the organisation boasts 1.3 million members with over 800 schools worldwide in 27 different countries.

Ji Do Kwahn Jahng Nim (which is Korean for Senior Master 7th Dahn) John Ives has been training since 1973. He became interested in martial arts after watching the Bruce Lee film ‘The Big Boss’. The first do jang John walked in to happened to teach Korean Martial Arts and that’s how he started. Today, he is lucky enough to be involved in one of the biggest, most comprehensive martial arts organisations in the world and is extremely proud to be part of it.

In 1976 Master John got his 1st dahn black belt and started teaching alongside his best friend Ji Do Kwang Richard Roper, who was the Head Instructor of the Norwich school at the time. Master John continued to teach as Assistant Instructor to Master Richard for a number of years.

When Master Richard left to go and teach in America in 1995, Master John took over the running of the Norwich school on a full time basis and at this point he also turned professional.

Master John is now the UK & European Chief Instructor and regularly attends seminars and tournaments in Europe including Spain, Italy and Amsterdam. He has also been proud to have been asked by Kuk Sa Nim to attend the American seminar tours, the most recent of which was in California back in February of this year.

Last year he was awarded his 7th degree by Grandmaster In Hyuk Suh (Kuk Sa Nim) at the 50th anniversary World Championship tournament held in Katy, Texas, a honorable achievement after 35 years of training.

Master John is most renowned for his high, strong kicks and his hand breaking techniques. NEST were recommended to us by fellow Kuk Sool Won members Chris Winter and Paul Cumbers, both of whom are NEST clients. They gave a lot of praise about NEST and the services they provide and coupled with the many good things we had heard about NEST and the fact we had also seen them at tournaments previously, this made our decision to join an easy one.

Using NEST for the collection of our student fees has reduced our administrative burden greatly. The NEST staff are so quick and efficient in getting things done and they have definitely made my partner, Jeannette’s life much much easier. We continue to use NEST because they are not just a collection company, they offer a lot more than that.  Their marketing ideas are fantastic and we have learnt so much already about promoting our business that we never knew before. They make us feel that we are important to them and can never do enough to help with any issue that we ask of them.

For instance, we needed some help with our advertising recently, particularly as a SSCo (School Sports Coordinator) gave us the go ahead to come into three local schools to do assemblies and teach evening classes etc… The SSCo said he would distribute 3000 leaflets to these pupils so NEST has produced some outstanding designs for some leaflets and banners for us to us for advertising purposes. We simply couldn’t have done the design work ourselves, but NEST knew exactly how to target and get the attention of our potential customers.