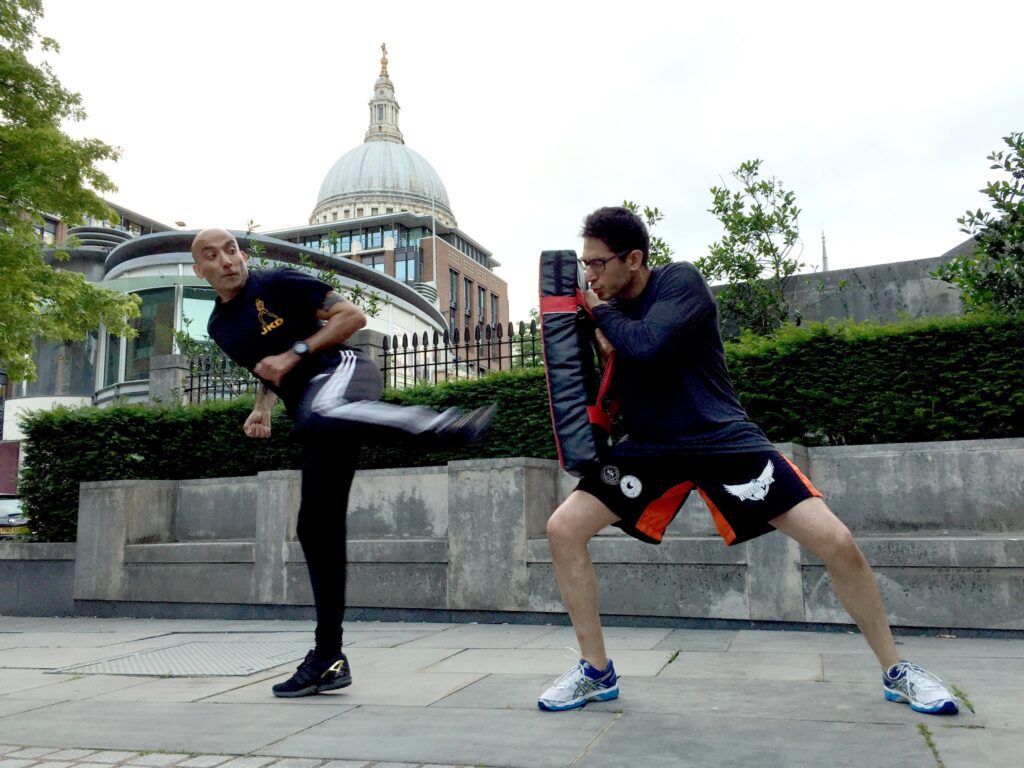 Martin gained his 6th degree Black Belt in 2008, and has been practicing for over thirty-one years. Alison obtained her 5th degree Black Belt (Master level) in 2007. Alison is the highest graded female Kuk Sool School-Owner in the UK, operating the well-established school in Lowestoft, Suffolk.

Together the successful husband and wife team currently oversee approximately two hundred students based in two locations in East Suffolk. They are very proud of the fact that they still have over sixty practicing Black Belts that attend their classes on a regular basis.

Over a period of twenty-four years, Martin and Alison have officially taught over two thousand people traditional Korean Martial Arts / Kuk Sool within their schools and over three hundred of these people have been promoted to black belt level and beyond.

The couple have plenty of high-grade Instructors, many of whom have been with them for nearly twenty years. In fact, in June 2010 Martin and Alison are expecting three of their students to be promoted to 5th degree black belt – Master level.

With continued support and encouragement from the Ducker’s many of their senior students have also branched out to open up their own Kuk Sool schools in other areas of the country, including Scotland. At least four of these school owners have already discovered the benefits of using NEST Management Ltd.

The Ducker’s philosophy is quite simple, – they are a ‘family orientated martial art’. Alison say’s “we place tremendous importance on teaching all the traditional aspects of the martial arts including, courtesy, respect and self-discipline. With this in mind, over the years we have become very popular within the local schools and have received recognition for our positive work within the community.

A recent example highlighting Alison and Martin’s success happened recently while they were eating out at a local restaurant. Quite unexpectedly a woman with her husband approached them. Thinking that they’d done something to upset this couple, Alison and Martin sat quietly and listened to what they had to say.

Overwhelmed with gratitude the middle-aged woman explained that many years ago, both Alison and Martin had taught their ten year-old son martial arts. She added, at that time her small, timid boy was very shy and introverted, however through his continued training and their added guidance he slowly began to change, eventually gaining a lot more self-confidence. The father said that fifteen years later, his son was now well-over six foot tall and was currently in charge of a multi-national company, dealing with millions of pounds. Both parents attributed much of their son’s success down to the single fact that his martial arts training actually helped change the young boy’s life around.

That day, Alison and Martin left the restaurant speechless, realising that their words and actions really do have some significant meaning and can make a really big difference.

Both Alison and Martin would like to say that as martial arts educators, they now never underestimate the positive impact that they might have upon other people’s lives.

Alison Ducker was only fifteen years old when she started practising Kuk Sool Won in 1981. She initially went along to the local martial art school to watch her boyfriend (Martin) practice, who at this stage was still a complete novice himself.

After sitting watching patiently week-in-week out for about three months, she was finally enticed onto the mat by the Principle Instructor. After that Alison was completely hooked into the ways of the martial arts and has never looked back since.

After nine years of involvement in Kuk Sool, Alison eventually obtained her 1st degree black belt. The reason this took so long was that she had stopped training to give birth to her two children during this time. Despite the set back with her promotion schedules, she was still determined to persevere with her Kuk Sool practice.

In 1997 Alison’s hard work was rewarded when she won the UK Kuk Sool Grand Championship title and she went on to gain two Gold and two Silver medals at the 2000 World Kuk Sool Championships in Houston Texas.  In recognition of her achievements the regional council named her as sportswoman of the Year.

As well as winning medals at tournaments, Master Alison has also performed at many prominent Kuk Sool exhibitions and demonstrations worldwide, including in South Korea and the USA. She was also part of the UK team that was invited to perform at the ‘Beckhams’ World Cup party in 2002 and describes the event as something ‘truly special’ She said “I literally had to pinch myself several times to see if the experience was real.”

Despite all of her achievements, Alison’s approach remains very down-to-earth and she is described by her husband as an ‘unsung hero’ within Kuk Sool.’ Martin explains that Alison is very quiet and unassuming, she doesn’t say too much, however no one really understands what she has had to go through in the past.

Over the years Alison has had to balance many aspects of her life, such as raising her children, helping to organise the martial art schools, supporting the Association, keeping her own training consistent and probably the hardest thing of all – looking after her busy husband.

Alison says, “Whilst it has been tough at times, looking back I wouldn’t change a thing – the whole experience has just been one incredible journey.”

For over twelve years we had used the services of a US-based martial arts Management Company operating in the UK. Initially they helped us grow our martial arts business considerably by teaching us how to adopt the many business skills and techniques that were already being used in America.

In August 2009, after much debate Martin and I decided to take a leap-of-faith and move our complete student base over to NEST. This was not a decision that was taken lightly; in fact it took us nearly ten months to finally make the move after carefully weighing up all the options.

Our main reason for changing over to NEST was that we firmly believed that Gerard and Joy, along with the rest of the NEST Management team were totally dedicated to helping us develop our schools and our business to an even greater degree, as well as providing us with a very professional, personal and trustworthy service.

The main benefits we enjoy from using NEST are:

We also recognise the fact that NEST is continuously aiming at supporting members of the martial arts community in the UK, including that of our own Kuk Sool Association.

Both Martin and I firmly believe that NEST Management has certainly helped to raise the overall standard of the martial arts industry here in this country. For that alone we are truly grateful.