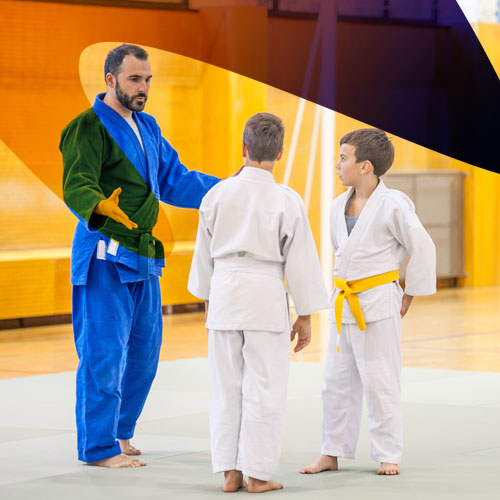 Darren started practising Kuk Sool Won 26 years ago when he was 13 years old. He went along with a friend and has been hooked ever since. Darren earned his yellow belt within 6 months and has been continually amazed how Kuk Sool Won has helped him through life, likening it to a good friend who never leaves you.

His greatest achievement has been gaining his black belt in 1992. He was also proud to be selected to be part of demonstration teams performing at various events including SENI at the NEC in Birmingham and ‘David Beckhams’ World Cup party.

Kuk Sool has taken him to places all around the world.  In 1999 he went to Houston in Texas and in 2002 he took part in the World Championships in Gyeong, Korea. He has also had the pleasure of travelling to schools in Spain and Germany to train and teach seminars.

Darren has won many U.K tournament medals over the years but has so far been unable to attain the honour of Grand Champion.  He is well respected within the Kuk Sool Won Association and has been a regular and enthusiastic participant in all the European and UK Championship demonstration teams over the last 15 years.

Darren has trained with and taught many Grand Champions at his former school –Lowestoft and to date has 5 Grand Champions in Kings Lynn an achievement he feels very proud of.

He puts his teaching ability down to being recognised and encouraged early on by his instructors JIKJN Martin and PKJN Alison Ducker. Despite giving him a hard time on many occasions he can now reflect on how it was all character building and thanks them for helping him to get where he is today.

2010 was a special year for Darren. In June at the Kuk Sool Won™ European Championships held in Kings Lynn. Darren was delighted to be promoted to Master( 5th Dahn) by Grand Master In Hyuk Suh. He is now part of a special group of fifteen 5th Dahn Masters in Europe.

This tournament also saw 101 of his students triumph by winning the Championships for the second year.

The successes of the last 3 years European Championships which were all hosted at ‘Lynnsport’ in Kings Lynn have really given Darren and the school a high profile within Kuk Sool Won™ as well as the local area.

This was highlighted at the 2010 KL FM West Norfolk Sports Awards, where Darren was named runner-up in the Coach of the year award and the tournament won Sports Event of the year.

In September 1999 Darren realised a dream by opening his own school in King’s Lynn. Starting small and building up students gradually Darren has taught over 500 students in Kings Lynn to date. Many students are now Black Belts and progressing to senior ranks and instructors within the school.

In 2004 Darren started teaching classes for 4-6 year olds, many of these are now well on their way to becoming 1st Dahn Black Belts. At the other end of the scale he has encouraged many students approaching the age of 50 and above to train and experience the physical and psychological benefits that martial arts can have.

2006 saw Darren move his school to its current location and it now operates as a full time professional school with 20 classes per week. The knowledge and enthusiasm he puts into his classes has a real positive effect on the students not just in Kuk Sool classes but in other areas of his student’s lives. Many parents report improvements and home and school.

Darren is passionate about sharing the benefits of Kuk Sool Won ™ with others and believes that age should be no barrier. This passion filters down to the schools instructors and students who are very friendly and supportive to new students. At the beginning of 2010 he was on crutches and unable to participate physically in classes due to an operation on an injured knee.  However, he was still at classes assisting his instructors with teaching and giving student’s encouragement.

He currently has over 180 students of various abilities and from all walks of life training at the school and next year will be proud to have trained 29 of them to Black Belt level.

Darren is proud to have a very happy school which is strong in family values and hopes that he can continue to help make a difference to all of his students’ lives through teaching the Kuk Sool Won ™ values.

He believes that ‘We all can achieve much more than we think we can!’

Darren and his partner Elaine who is also a Kuk Sool Won Instructor at the School are delighted to be again hosting the European Championships this year in Kings Lynn.

Elaine works tirelessly to find sponsorship for the event and is instrumental in the organising and administration for the event.

We had been with a billing company since 1998 and were very aware that this saved a lot of admin time and was a more professional way to operate our school.

We had known about NEST for many years and had always thought that it would be too much of a problem to change companies, after all we had no problems with who we were with.

At a chance meeting with Gerard he asked us if he could show us the NEST online system, with a no pressure sales pitch.  What we saw spoke for itself and we were totally convinced that NEST were so much more than a billing company.

The online system was exactly what we wanted for our school, as we had systems in place that collected attendance, kept grading and student records and recorded prospects but not all in one easy to use system. This just seemed to fit our relatively small school and with guidance from Gerard on how to manage the financial aspect of the school we were sure that NEST could help us achieve a more successful school and grow our student base.

The smooth transition from our previous company to NEST took place over three months at the beginning of 2009 and we have not looked back since.

Gerard and the NEST team are really easy to get hold of and talk to and they have a good knowledge of the martial arts industry in the UK.

NEST has brought so many part and full time Kuk Sool Won™ schools together as a group in which we are able to share ideas about business and growing our respective schools, something that would never have happened without their input.

I always feel that Gerard and the NEST team encourage the sharing of ideas and never dictate; they give the right information to enable individuals to make informed decisions in order to fit in with their own plans for their individual schools.

NEST support and guidance is invaluable, you feel you are looked after as an individual person and school not just a ‘one solution or idea fits all’ and they will always listen to your ideas and feedback.